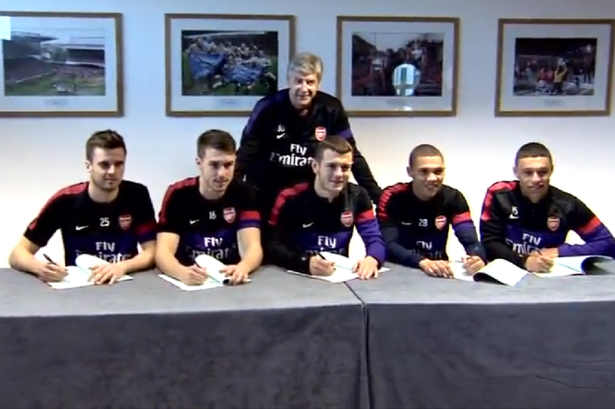 Arsene Wenger paraded his Brit pack as five young Gunners signed long-term contracts – but the final piece of the jigsaw was missing.

Wenger is offering Theo Walcott £75,000 a week to keep him at the Emirates.

We revealed earlier this week that Wenger had broken the impasse with Walcott, 23, by playing the England winger in a central striker’s role in Monday’s five-goal romp at Reading.

Now the Arsenal boss hopes to persuade Walcott to stay and stop yet another big name from quitting for one of the Gunners’ rivals, with Chelsea, Liverpool, Manchester United and City all ready to pounce.

"We are delighted that these five young players have all signed new long-term contracts," said Wenger, who is pleased to have retained a British core within the team.

"The plan is to build a team around a strong basis of young players, in order to get them to develop their talent at the club.

"Jack is certainly the best known, the leader of this group - but the other four players are exceptional footballers, and we're very happy that we could conclude their new deals at the same time.

"Gibbs, Jenkinson, Oxlade-Chamberlain, Ramsey and Wilshere represent a core of the squad and it's an extension for a long period for all of them.

"I'm a strong believer in stability and I believe when you have a core of British players, it's always easier to keep them together and that's what we'll try to achieve going forward."

Wilshere, 20, has been in fine form since returning to action in October after 15 months out with ankle, foot and knee injuries.

Ramsey has made 24 appearances for Wales, who he also captained, while the other four are England internationals.

Arsenal climbed to fifth in the Barclays Premier League following Monday's 5-2 victory at Reading - two points adrift of fourth-place Tottenham - in a result that has relieved some of the pressure on Wenger.

But the Frenchman is still among the favourites to be the next top flight manager to lose his job, with compatriot and former Liverpool director of football Damien Comolli amazed his position is questioned.

"It's totally impossible for me understand. He has been carrying that club on his shoulders for 16 years, especially since David Dein left," Comolli told talkSPORT.

"I'm even amazed that people ask the question about his future. When people say there is money but he doesn't spend it. Well that doesn't make sense to me.

"What he has done and what he still does, to keep the club at that level, is amazing."
at 2:23 PM