As Group A teams in the 2013 Orange Africa Cup of Nations travel to Durban on Sunday, it is still anyone’s guess who will be the two top finishers in the group. This is after the second Group A match of the 2013 Orange Africa Cup of Nations between Morocco and Angola ended in a goalless draw at the National Stadium in Johannesburg on Stadium on Saturday night. 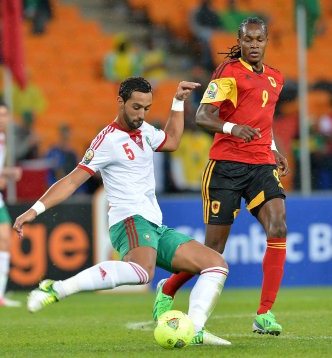 Earlier, South Africa and Cape Verde also played to a goalless draw. Both Angola and Morocco will look back at this game and rue their missed chances. That they played quality football cannot be disputed. What will be comforting though is that they will travel to the coastal city in Durban with all to play for.

Angolan forward Manucho had back-to-back chances within a space of four minutes towards the folding stages of the game, but in both chances, he could not put his country in the driving seat. In one instance just only six minutes before the fulltime whistle, Manucho found himself unmarked in the box, but he rushed his shot. It was by far the best moment for Angola in the game.

Until that slip in concentration, Morocco has looked impressive and organised. They attacked in unit and defended in numbers. Morocco’s Younes Belhada produced an act of individual brilliance with 20 minutes to go when he took on the Angolan defence, but his final shot narrowly missed the upright. On the other end of the field, Angola’s Guilherme also came close to opening their account when he capitalised from a mistake by Morocco keeper Lamyaghri, but at the end, he couldn’t compose himself.

The first half produced some enterprising football from both teams. Morocco looked lively in the opening stages; they looked comfortable on the ball, created space and chances, but often could not connect the last ball. However, it was Angola who started to ask questions as early as the third minute when striker, Mingo Bile hit the ball hard and low towards the far left upright. Nadir Lamyaghri did well to save the strike. Morocco made a swift response trying to catch Angola on the counter, but Angola keeper, Lama pulled a great save. Few minutes later, Lama was required to make another acrobatic save to deny a powerful strike by Morocco’s Pirolito.

From those two chances, Morocco grew in confident and looked more positive. They launched successive attacks on Angola last line using their flanks. On Wednesday, Morocco will play Cape Verde. Angola, on the other hand, will face hosts, South Africa. All four sides will be aiming for maximum results to proceed to the knockout stages of the competition.
at 6:02 PM