February 14, 2013 -- American Airlines and US Airways agreed Thursday to merge in an $11 billion deal that would create the world's biggest airline.

The combined carrier will be called American Airlines and be based in Fort Worth. It expects to have $40 billion in annual revenue and offer more than 6,700 daily flights to 336 destinations in 56 countries. 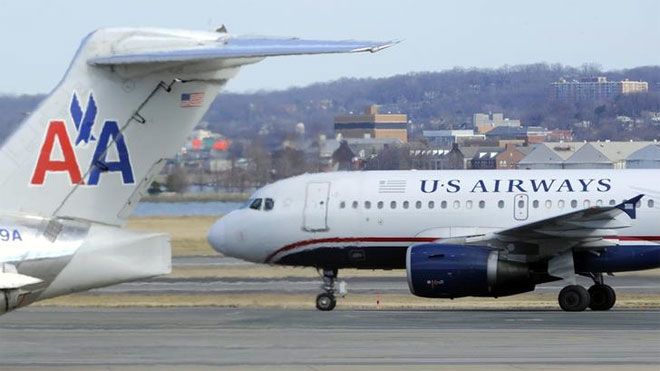 Travelers on American and US Airways won't notice immediate changes. It likely will be months before the frequent-flier programs are combined and years before the two airlines are fully integrated.

The deal is a coup for smaller US Airways Group Inc., and was driven by the persistence of its CEO, Doug Parker, who will run the combined airline. Parker sought a merger almost as soon as American parent AMR Corp. filed for bankruptcy protection in November 2011.
As Parker pushed ahead, creditors forced AMR's management to consider the value of a merger compared with a plan for an independent American. Eventually they concluded that the best return for stakeholders, and the best chance to compete with bigger rivals United Airlines and Delta Air Lines, came from a merger.

The deal also caps turbulent decade of bankruptcies and consolidation for the U.S. airline industry.

Since 2008, Delta gobbled up Northwest, United absorbed Continental and Southwest bought AirTran Airways. If this latest merger goes through, American, United, Delta and Southwest will control about three-quarters of U.S. airline traffic.

The rapid consolidation has allowed the surviving airlines to offer bigger route networks that appeal to high-paying business travelers. And it has allowed them to limit the supply of seats, which helps prop up fares and airline profits.

That concerns some consumer advocates, but Parker sought to assure travelers that the merger helps them too - by creating a bigger rival to United and Delta.

"There are two very large airlines right now and this creates a third," Parker said in an interview. "It provides good competition to those two."

Most airline mergers have resulted in a reduction of flights and shrinkage at some hubs, but Parker said this deal will be different because US Airways and American overlap on just 12 routes.

He said the new airline will keep all of American's hubs - Dallas-Fort Worth, Chicago, Miami, New York and Los Angeles - and those of US Airways, in Phoenix, Charlotte and Philadelphia. Many airline mergers have resulted in some hubs being downgraded, as happened to Cincinnati after Delta bought Northwest.

"Hopefully the service will be better with two airlines united to do what one hasn't successfully done so far," said Mary Gorman, 63, who was at Miami International Airport on Thursday for a flight home to Virginia Beach after a cruise with her husband. "If the service is better, I don't mind paying more for a ticket."

While Parker becomes CEO of the combined company, AMR CEO Tom Horton will serve as chairman until its first shareholder meeting, likely in mid-2014. Parker becomes chairman after Horton leaves.

The boards of both companies approved the deal Wednesday. Executives said they were confident that antitrust regulators would approve the merger. It also needs approval by AMR's bankruptcy judge. The deal is expected to close in this year's third quarter as part of American's emergence from Chapter 11 protection.

AMR creditors will own 72 percent of the new company, with the remaining 28 percent will going to US Airways shareholders. The creditors' portion includes a 23.6 percent share for American employees and unions, plus a small stake for existing shareholders of American's parent AMR Corp.

The airlines said they expect $1.05 billion in combined benefits from the merger. They expect the bigger airline to lure corporate travelers away from competitors, contributing to $900 million in additional revenue. They also anticipate cost savings of roughly $150 million.

The savings would have been higher, but the company expects to pay out $400 million per year in raises for workers. Unionized workers at both airlines have seen their pay languish, with some US Airways pilots still flying under a contract signed when that carrier was in bankruptcy protection in 2005.

The combined airline also expects to spend $1.2 billion on one-time transition costs over the next three years.

It will stay in the "oneworld" airline alliance, where it is partners with British Airways and other overseas airlines. Those alliances make it easier for international travelers to plan trips that include multiple airlines.

The companies had negotiated since August, when creditors pushed AMR to conduct merger talks so they could decide which earned them a better return: a merger or an independent American.

Delta and United's size have allowed them to get more than their share of business travelers, US Airways President Scott Kirby said on a conference call.

For instance, Delta's shuttle service up and down the East Coast competes against a similar offering by US Airways. But Delta passengers can connect to more overseas cities than US Airways passengers can, and American doesn't have a shuttle at all. But with the US Airways shuttle feeding passengers into American's overseas flights, the merged airline would get more business travelers, US Airways argued in its presentation to creditors in January, which was filed publicly on Thursday.

The combination will also boost American's service to Europe and Latin America and the Caribbean. But some analysts noted that the new American will still be weak on routes to Asia.

"Without a major Pacific presence (just a mere five destinations and eight routes), American doesn't come close to either Delta or United's presence in the market," Helane Becker, airlines analyst for Dahlman Rose & Co., wrote Thursday in a note to clients.

The new board of directors will have 12 members: Three from American, including Horton; four from US Airways, including Parker; and five appointed by American's creditors.

AMR shareholders are poised to get a 3.5 percent stake in the new airline. That's unusual because stockholders typically get wiped out in a Chapter 11 proceeding.

Horton said AMR's bankruptcy creditors might be repaid in full. He said his company cut costs, reduced debt and moved ahead with orders for new planes during the bankruptcy process, increasing AMR's value to US Airways.

That, he said, "allowed us to make a deal with US Air that was on the right terms for American and our people."

(Copyright ©2013 by The Associated Press. All Rights Reserved.)