The enigmatic striker has come through on the big stage, with two well-taken first-half goals leading the Azzurri into the final for the first time since 2000 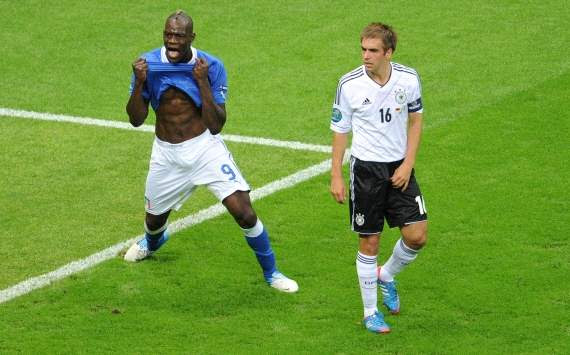 A brilliant performance from Mario Balotelli has driven Italy into the Euro 2012 final, after a 2-1 win over Germany at the National Stadium on Thursday.

The Manchester City forward has hit the headlines for all the right reasons, opening the scoring with a powerful header before smashing home an emphatic second to clinch a date with Spain at the Olympic Stadium on July 1.

It was a deserved victory for Italy, which could have added further goals in the second half had it taken one of the numerous chances afforded to it by Germany's rushes forward to find a way back into the match.

Mesut Ozil ensured a nervy finish to the encounter with a penalty in second-half stoppage time, but there was to be no miracle for Germany, which bowed out at the semifinal stage for the second major tournament in a row.
Joachim Low restored Mario Gomez and Toni Kroos to his starting XI after the Bayern Munich pair was benched for the quarterfinal victory over Greece.
Cesare Prandelli made only one change from the side that eliminated England on penalties, with Giorgio Chiellini recovering from an injury in time to replace Ignazio Abate.
It was Germany which threatened first only six minutes in, after Mats Hummels’ scrambled shot was blocked on the line by Andrea Pirlo, allowing Gianluigi Buffon to smother.
The Azzurri skipper nearly forced an own-goal moments later after inadvertently diverting a Jerome Boateng cross into Andrea Barzagli, but the deflection rolled just wide of the post.
Despite the scares at the back during the opening exchanges, Italy was quicker to settle into the match, and began to establish a rhythm with some patient play in midfield.
Riccardo Montolivo blasted into the arms of Manuel Neuer from the edge of the box, but the Germany keeper was forced to work much harder by Antonio Cassano, whose curler towards the bottom corner was tipped away.
Italy started to get into its stride and was asking growing questions of the suspect German defense. Then, with 20 minutes gone, the Azzurri carved them completely apart.
Chiellini fed Cassano on the overlap down the left, and the Milan forward delivered a superb cross into the heart of the area, where Balotelli rose above Holger Badstuber to head Italy into the lead.
Italy was buoyed by the goal, with Germany still unable to shake off the erratic edge to its play. Montolivo’s hesitation allowed Badstuber to strip him of possession deep inside the area, but the new Milan signing would make a far more decisive contribution with 36 minutes gone.
His searching ball over the top caught the German backline out completely and released Balotelli, who stormed towards goal and smashed an unstoppable finish high into the back of the net.
The Manchester City man was booked for ripping his shirt of in a passionate celebration, but there were no such signs of desire from Germany, which was showing none of the verve from its entertaining win over Greece in the previous round.
Low was facing an uphill battle to get his side back into the match, and responded in kind, hauling off Gomez and Lukas Podolski at halftime for Marco Reus and Miroslav Klose.
Germany improved in the second half but Phillip Lahm should have done a lot better after the restart, blasting over from the edge of the box after he was teed up in space by Kroos.
Die Mannschaft continued to press forward, but a pair of fantastic challenges from Barzagli and Bonucci halted Klose and Mesut Ozil from point-blank range.
Reus was next to try his luck with a powerful free kick from 20 yards out, but Buffon was equal to it and managed to punch over the crossbar.
However, for all Germany’s increased endeavor in the second half, it still lacked a cutting edge in front of goal, and with its urgency in the Italian half, was increasingly vulnerable to the counterattack.
A sweeping break just past the hour mark saw Alessandro Diamanti slip in Claudio Marchisio behind Badstuber, but his finish was driven the wrong side of the post.
The Juventus midfielder spurned an even greater chance with a quarter of an hour to play, when Badstuber’s slip allowed him with a clear sight on goal, but he disappointingly dragged his shot wide.
Germany was simply nowhere to be found, and could not make its forward pressure pay as Italy continued to take it apart on the counter.
Substitute Antonio Di Natale wasted the pick of the chances on 82 minutes after being put one-on-one with Neuer, but with all the time in the world to pick his spot, he instead found the side netting.
Germany was handed a late lifeline after Balzaretti's handball was spotted in the box, giving Ozil the chance to bury from the spot.
However, there was nothing left from Low's side despite an even later surge forward, giving Italy a nervy, but deserved victory.
at 2:10 PM