Manchester City's youngster Abdul Razak has been sent home by the Ivory Coast for FIGHTING with a team-mate.

The 20-year-old midfielder was punished for scrapping with Jean-Jacques Gosso, who plays in Turkey for Mersin Idmanyurdu, during training ahead of their country's World Cup qualifier against Tanzania on Sunday.
Gosso was also given his marching orders over the fight, which was witnessed by Man City star Yaya Toure,


Dominant midfielder Toure, who scored in the Ivory Coast's 3-0 win over Gambia last week, is no stranger to training-ground bust-ups as at City he has seen the likes of Mario Balotelli, Jerome Boateng, Micah Richards and even former manager Roberto Mancini involved in a series of heated exchanges at Carrington.

And he was spotted in the background looking exasperated as the fight unfolded in front of his eyes at the Felix Houphouet Boigny stadium in Abidjan on Wednesday.

Razak left Crystal Palace's youth set-up to join City in 2008 and has yet to break through at the Etihad Stadium. He has made five league appearances as a substitute for City, and was shipped out on loan to Charlton Athletic last season. 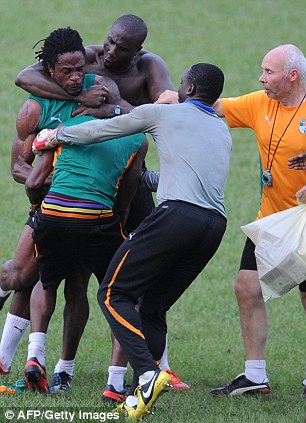